It only took me a few hours to get to Mostar via bus. When I arrived at the station, I did not have to go through the usual “how the hell do I get to my hostel?” line of reasoning because the family who owned the place offered to pick me up. When the grandmother drove me back to their home, she narrated the ride. During the war she moved to Canada as a refugee. Because the war destroyed so much of the industry in Bosnia, she said that most people rent out places to tourists for survival. Winters are always harder because it’s off season. During the conversation she pointed out various spots that had been damaged by the war but repaired. At one point, she pointed across the street and said “that was the front line.” A completely normal street I never would thought twice about was the front line. Saying that I couldnt grasp her words would be an understatement. And then right before we pulled up to the house she pointed across the river, and there it was; the famous old bridge of Mostar. Beautifully restored after the war so brutally tore it down.

At the house, the daughter Nina made me dinner. On the table there was a basket with all sorts of shell casings that the husband had collected. 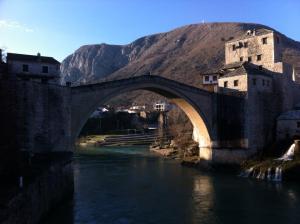 Once again I was the only one in the hostel. It is interesting, paying only about ten dollars a night for what is basically a private hotel. It’s a pretty good deal.
The next morning I got to try my first Bosnian coffee. A strong espresso like shot of caffeine with cubes of sugar on the side. I walked through the old town which was pretty fully restored and saw a few mosques. The stores marketed at tourists were selling toys made from the bullets that I’m assuming used to litter all the streets. It felt morbid that people were selling figurines and pens made of the weapons that killed so many families. I decided that I would not pay for something that had caused such pain, but that wouldn’t stop me from search for a few bits of the war myself. When I got back to the hostel, I decided to search the yard for any shell casings from the war. I found three.

So this is what it’s like to be in war torn places. Even now every block has some sort of collapsed/collapsing building. Bullet holes line every block and pictures of the collapsed bridge stand next to the new rocks on the new one.

The next day before a woman came up to me asking for change. She was holding a baby. I didn’t understand anything but her outstretched hand and luckily I had change to spare. What affected me the most was not that there was a woman on the street with a baby, it was that she wanted to prove to me that the baby was in fact real. In the freezing weather she unwrapped his blankets. It made me want to cry.
Later, at the bus a group of kindergarten age boys ran from bus to bus begging for some small change too. It seems that it takes longer than 20 years to recover from a war. Perhaps one never recovers. 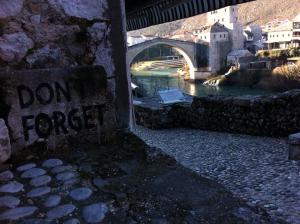