I’m on a bus to Prague right now. My time in Munich went by so quickly! Again, I wish I could have had the time to stay longer. This type of tourism is amazing for seeing the sights but makes it difficult to really learn a lot about the culture of a place.
The first day I arrived in Munich is was snowing. It was the first time I had actually seen the snow fall. Each snowflake really did look different and even though I was freezing it was a gorgeous sight.
It’s interesting to experience winter for the first time. I do not know how people deal with it every year. It’s obvious to everyone around me that I am mal adjusted to the cold. People look at me a bit strangely as I shiver in apparently not that cold of weather (well below 32 degrees fereinheight), it isnt until I say im from California that they begin to understand. I already picked up a cold and it makes exploring a city difficult because staying outside for long periods of time is virtually impossible. Thank god im in the best place to get a really cheap amazing beer.
The first day I got to Munich I decided to go to the concentration camp in Dachau. When I got off the train, there was a huge crowd of folks waiting in the snow for the bus that would take us to the camp. Because it was snowing, people rushed the first bus that got there and pushed their way through the line. I was taken aback that people on their way to see a memorial of inhumanity, a concentration camp for godsakes, would shove their way past others waiting in line. It seemed disturbing to me, as if people waiting in line at a graveyard would shove past each other in order to see the plots first. As the first bus left I looked around at the others who had not made it, and standing right next to me was a woman holding a baby and comforting her two other young sons (maybe four and six). People had been so desperate to get to the camp first that they pushed in front of children, small kids who then had to wait another fifteen minutes in the snow. It was disgusting moment to me. In this space that was supposed to commemorate a genocide, adults rushed past babies as if on the way to the death camps themselves.
Then when I got to the actual memorial on the second bus I was again taken aback by the gift shop and restaurant at the entrance. How could people drink hot chocolate outside a place where so many were senselessly murdered? Do people really send postcards from concentration camps, take selfless in front of a gate that has smelt so much death? The answer is yes.
Inside the camp, lined by the ornate and inescapable fencing and mote, they had some remaining housing units where the victims slept. They also had a museum with a statue to commemorate the 41,000 souls who died in Dachau. When I went into the crematorium and the gas chamber, people were taking pictures too. Do they understand that people died there? Why do they treat it as if it is just any other tourist destination? It’s as if those visiting do not truly grasp what happened there. If you did, how could you possibly take pictures of that type of pain.
Seeing the camp in the snow was also something I will never forget. By the end of the hour I spent there, I could not feel my hands or my feet. Assuming that I was probably much more prepared clothing wise than those who were actually held in the camp, it is a wonder any of them survived the winters in that hell.
By that time I was ready to head back to Munich. I grabbed the next bus and train and went to bed early as I was still feeling a bit sick.
The next day was much lighter. I decided to go to the Sleeping Beauty/Disney Castle (Neuschwanstein Castle) in Fussen Germany. The train ride took about two hours and I ended up in a gorgeous town I had never heard of before, Fussen. From the train station they had a direct bus to the castle (gotta love European public transportation). The bus took us to the bottom of a look out point where you could see the castle from a bit of a distance. Usually there is a second bus that takes you the second half of the way up the mountain but because it was New Years Eve we got to hike! It was actually a really beautiful walk (besides the weather). I walked past the most gorgeous lake with a black forest that surrounded its every shore. Snow covered the tips of each tree and the fog slowly rolled in over the mountains. It was a beautiful sight. 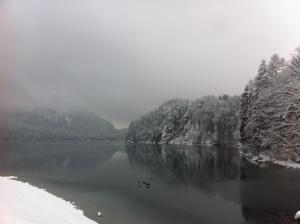 After the 20 minute hike/walk up the mountain I got to the castle and it looked like it came right out of my childhood imagination. I wish my little sister could have seen it she would have had a field day pretending to be a princess and whatnot. The medieval architecture and the fact that all you could see around it was the icy isolation of a forest. It would have been a perfect place to play. Walt Disney did not invent anything, he stole all his greats from various places around the world. 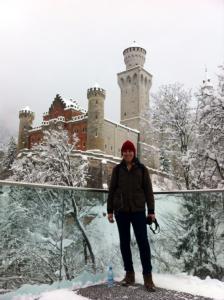 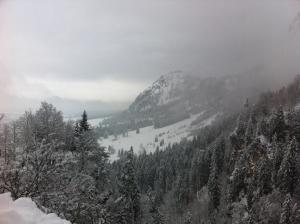 The coolest thing was that when I walked up to the front gate of the castle, the door was open! I got to go inside for about 15 minutes before the guard rushed a few of us out and it looked incredible. The cone towers looked even more majestic up close. Medieval architecture is definitely exciting to look at.
Unfortunately, I was really not feeling too well at this point so I decided to head back to the train station to catch the next train to Munich.
It’s funny, I had already spent two days in Munich and had yet to even see the city itself. I would have to leave my entire site-seeing itinerary to the next day however because I was so exhausted.
Because New Europe Tours offers free guided walking tours of most major cities, I thought it would be more efficient to go with them instead of me doing it myself and risk taking too long to navigate/miss something. They took us to all the major sites. Munich is a beautiful city I wish I could have stayed longer. The other German cities I went to modernized after the damage inflicted during WW2. However, Munich rebuilt their buildings with older style architecture so it still retains a very old vibe. It is interesting now how in a lot of modernized cities, globalization has rendered a lot of places rather identical. When I was in Cologne I was thinking that if the city were transported into the US I would never guess it was German in origin. Munich definitely had that distinct German feel to it.
Well, now I’m off to Prague! More updates soon!
Seeing it in the snow